Edson will have limited operations on December 1 and 2. Shipping will resume on December 5.

For good and bad (mostly good in our eyes), the popularity of Edson steering systems on production sailboats down through the years leads many many sailboat owners to assume that they have Edson steering on their boats. This may also be a bit of wishful thinking, for the simple fact that most of the steering manufacturers that popped up during the sailboat boom have gone away while Edson is still going strong. Buying replacement parts from a company that still exists and, in the majority of cases still makes the parts that came as original, makes life a whole lot easier. But even keen and experienced eyes sometimes have a tough time distinguishing Edson systems from the many "tribute" systems that have appeared through the years.

The first and biggest telltale is the hole spacing in the pedestal base. There are a very few out there that adopted Edson's 6" on center mounting pattern, but if the hole spacing isn't 6" on center in a Northeast-Southeast-Southwest-Northwest orientation, we can immediately know that it's not an Edson pedestal. Edson has always used this 6" on center configuration, even with our Vision pedestals. The tape measure in this photo would be running either athwartships or fore and aft. 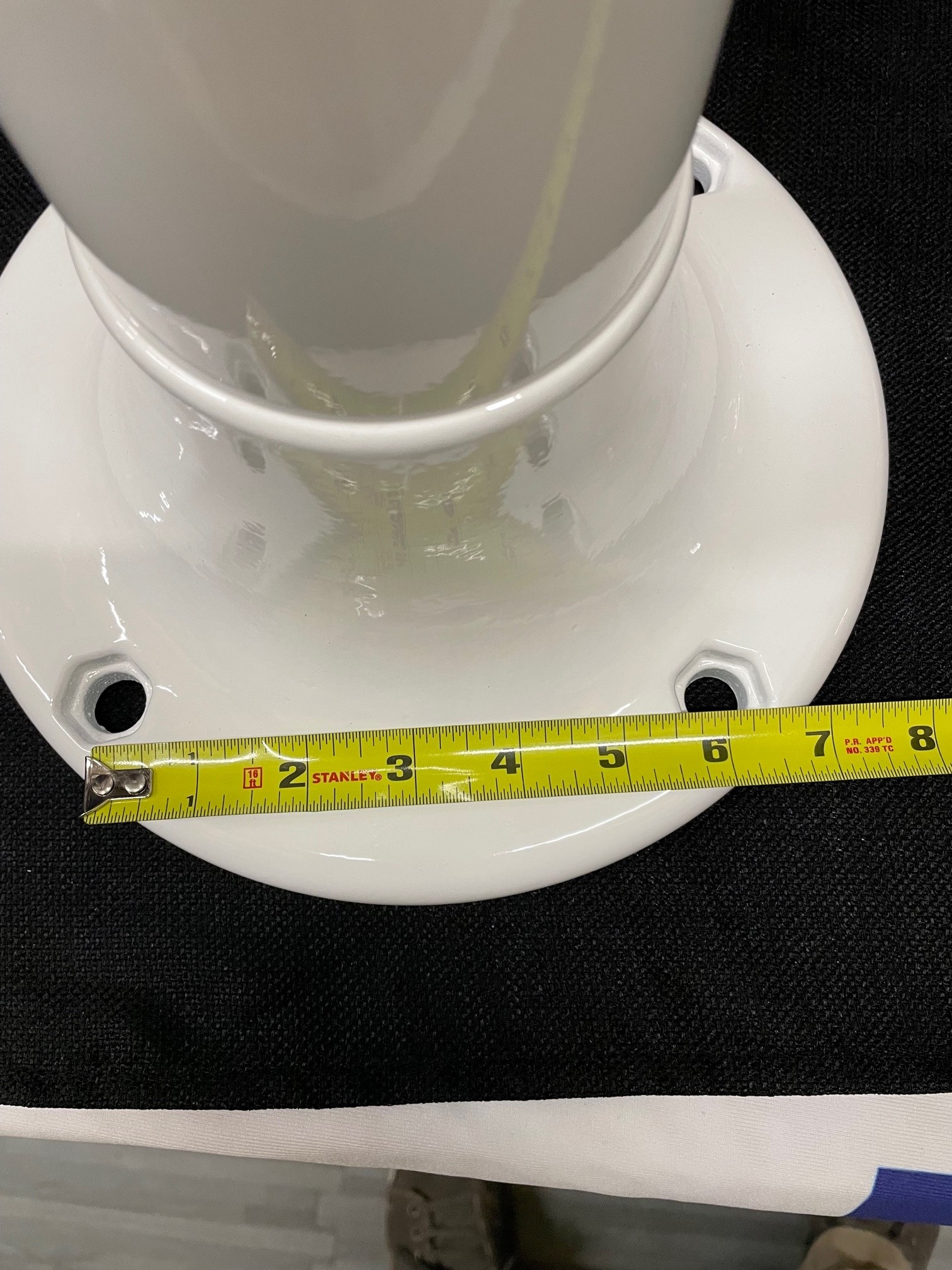 It's possible but unusual for an Edson pedestal to not have a recognizable Edson serial number sticker. The pedestals that we'll ship today have the same serial number sticker that we used decades ago like on the pedestal in the photo below. Our phone # is the same but we don't get too many faxes these days. If the sticker isn't there, it's possible that it was removed or fell off, but it's unlikely - the stickers have some atomic glue on them and they're protected from the elements so they usually stick around. 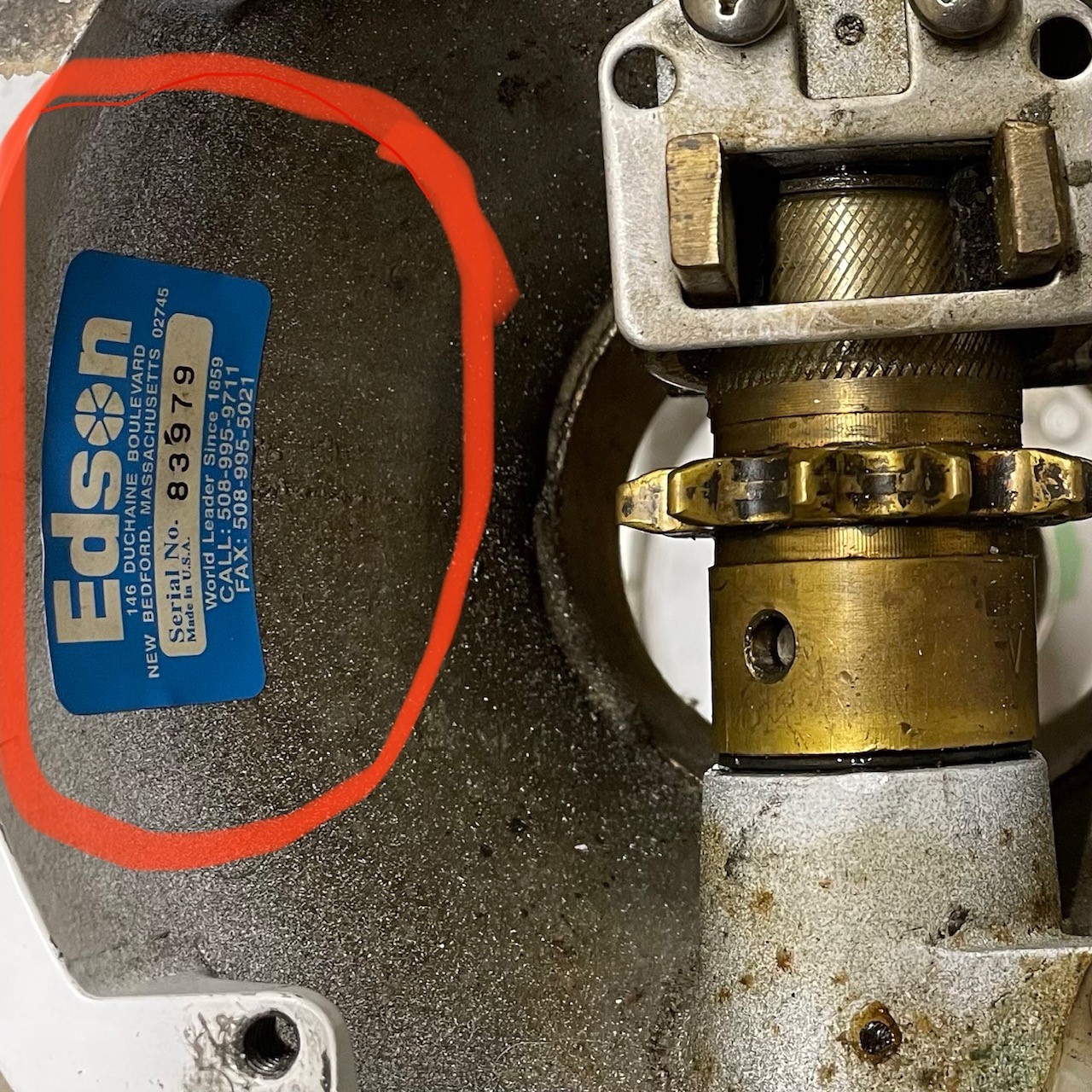 The brake system, whether the classic side brake or the more modern thru-shaft brake, usually provides some clues. On the side brake, the brake legs are clearly marked as Edson.

You can see the top of the side brake system in the photo with the serial # above, but the underside of the side brake setup is also instructive. Note that you wouldn't be able to see this ordinarily without a boat show display head, but if you took the steerer apart you could see this. Note how one leg is threaded (with the arrow pointing at it) and the other has a clearance hole. The brake is held in place by the brake shaft at the bottom and the top plate above (visible in the above photo). There's no other mounting parts or pieces. 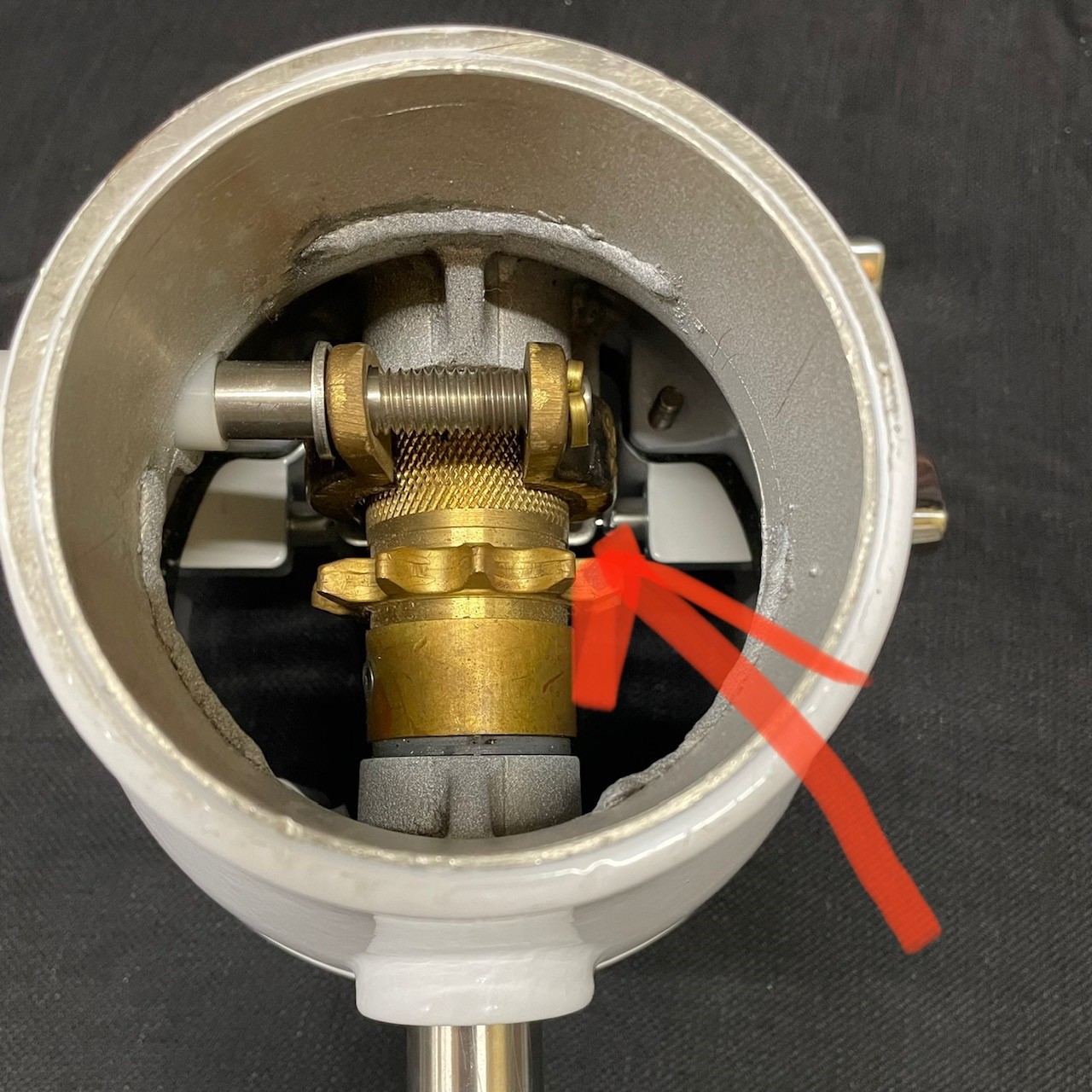 The sprocket (bronze part above) can be either cast bronze or cast stainless in an Edson pedestal, so the material isn't an indicator. 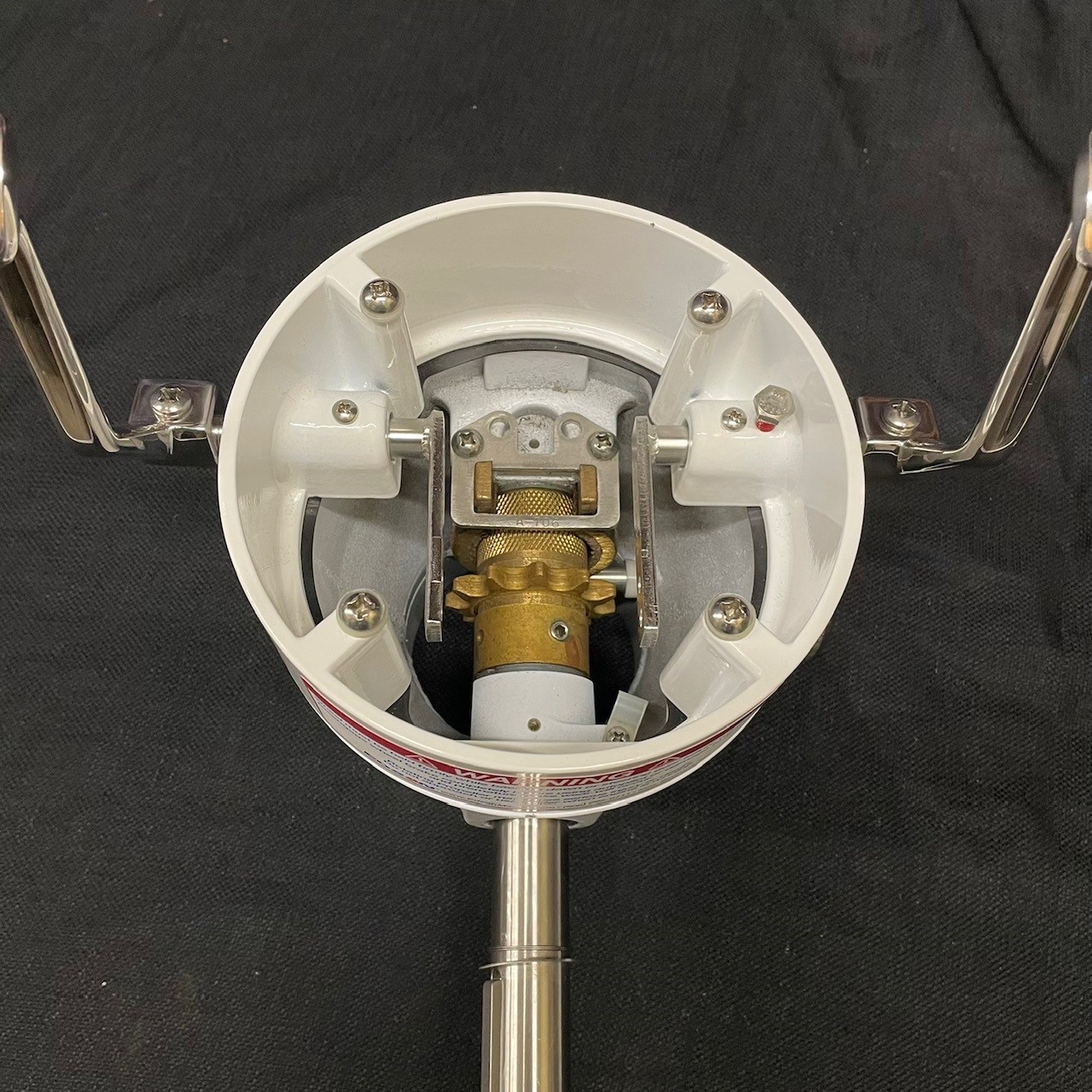 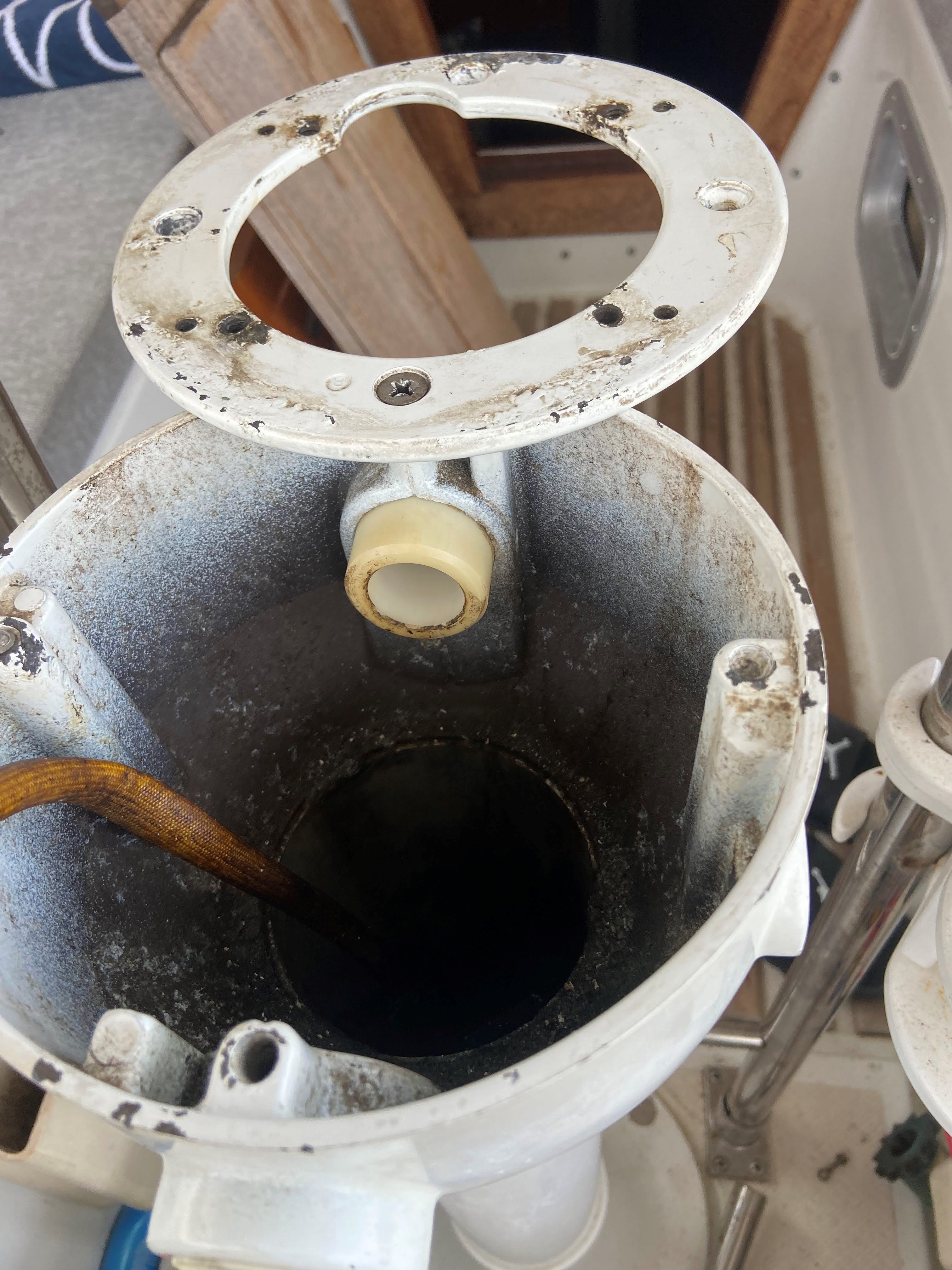 You can also see a bushing in the front of this pedestal bowl, where the front of the steerer would sit. Edson steerers have bearings. It's possible that someone blew up a bearing at some point (they're durable but we give a 20 year service life recommendation on them) and replaced it with a bushing in a pinch, but it's unlikely. With the other evidence here, it's easy to say "not an Edson."

The pedestal guard isn't an integrated part of the system, so Edson pedestal guards can be used with other systems and vice-versa, but typically we would see an Edson guard with an Edson pedestal. Edson guards are 9.5" on center as in the pic below, and the feet are smooth sockets and not the toe-stubbers you see on this one. It's also easy to spot the inferior cup holder and not the elegant Edson version (link), although no matter what system is on the boat, sailors of good taste who prize beverage security will always choose the Edson drink holder.

Unfortunately, it's usually a ton easier to give a yea or nay on whether a system is an Edson than it is to identify which of the other systems it is. In many cases it's a moot point since you're up against it trying to find parts for whatever system you have if the answer is "nay."

Critically, an Edson wheel nut is a terrible indicator of the provenance of a system. Several builders in the 70s and 80s actually bought Edson wheel nuts to try and give their boats that Edson flair while equipping the rest of the system with other parts. We see that one a lot.

The most readily interchangeable parts that are out there are chain and wire kits (link) - our chain and wire kits will work on any steering system that used #50 or #60 chain and wire rope. Quadrants and radials can generally also play nicely with other systems. Sheaves, idler plates, steerer parts, brake parts - these are all going to be much harder to adapt ours to another system and in most cases it just doesn't work. Depending on what state the current system is, the best and even most economical course of action may be a complete pedestal replacement (link).